Personal Growth What Does Success Mean When The World Is Full Of Suffering? 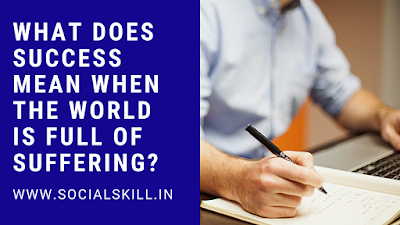 Readers, my eye has been twitching for days. Lower lid twitch. It’s a minor annoyance. I think my eyes are tired of everything they’re seeing. My circle of concern is on fire. Plague, protests. Racism, authoritarianism, cynicism, pessimism. Climate change. The paterfamilias is suffering from frailty and isolation. The doggo needs surgery for a fast-spreading cancer and yes, he is going to get it, but will it be in time? It was damn hard to get an appointment for him, because the surgeon veterinarians are all booked up, now that they’ve reopened. Anyway, my circle of concern is on fire and my circle of influence seems about the size of a pinprick.
What does success mean when the world is full of suffering? What does it mean to be successful in a world like ours? Can there be any success when so many people have no chance for it? There are moments when continuing to address the single-focused need to self-actualize seems too small.
“How do you want to be changed?” Gil Fronsdal asks in his dharma talk about the protests in response to the murder by police of George Floyd.
How do I want to be changed? Essentially. That’s how. I want to operate from that place, and I want to make things better for Black people. That will make things better for all people. So helping to eliminate racism is key.
How does that relate to success? Well, the scrabble after accumulating material goods and money that so often defines success seems to be accentuated by the recognition that the world is so much about haves and have nots. In other words, the drive for material success is powered by fear of becoming a have-not. So helping eliminate the have-nots is one key. By “eliminate”, I do not mean genocide. People, do not quote me out of context! I mean eliminate the have-nots by eliminating their state of want. If the worst-off in society had basic needs met, had health care, had housing, had education, had food and clothing, and community, then the fear would abate, and the scramble for accumulating maximum resources would abate, too. And the racism would abate, too. Or so it seems to me.
So what do I do when my circle of concern is ever-expanding and my circle of influence seems like a pinhead? Well, a pinhead can be just enough space. This reminds me of the cute townie boy I used to chat within the second-hand store in Oxford, my junior year abroad. I could tell he was half-annoyed by me, because I was a privileged gownie, but also half interested in me because I was, well, cute and American. Anyway, I digress. The point is that one time he told me that Oxford had many elements. “It’s the whole world on the head of a pin,” he said. He was really cute. Did I mention that? I don’t know how broadly he had traveled, but nevermind. He meant I should look beyond the spires of the university. There were layers and problems right there. So it may be small, a circle of influence the size of a pinhead, but it’s still a circle of influence. According to Stephen Covey, in his Habit 1 of highly effective people, the circle of influence is our locus of operation. We can only control what we can control, and as always, that starts with our own behavior.
So, what can I do? Well, turn to the teachers, of course, because teachers are focused on creating the next generation. And before we say what my graduates have been hearing, over and over, that they are the future and our hope, that they have to fix the mess they’re inheriting, let’s realize what the husband said the other night: We don’t have to hand it all over to them and wait for them to fix things. We can fix things right now.
Some of the teachers at the high school posted videos for the seniors with their two cents. Since I don’t have any cents to pass on these days, I am once again and always beholden to the amazing, dedicated educators who have taught my children. Teaching is a truly noble profession, and teachers have really stepped up during the pandemic.
From beloved math teacher, Mrs. M., came her famous, or infamous, acronym “ROHD to success”. To succeed, she said, you need to focus on the following four values: Responsibility; Organization; Discipline; and Honesty. These are solid traits to develop, for sure. I think what she said by way of greeting, however, is equally important, and chosen with intent. “To the loving, caring, cute class of 2020” she began, and I couldn’t help notice those values either. She teaches advanced math students Calculus and Math 3/Linear Algebra, so focusing on achievement might be what you would assume is most important to her. However, she focuses on character, and on love and caring. I think that’s telling.
R Responsibility — Be proactive, as Stephen Covey says, not reactive. Operate from a center of self-control and good will. Argue for fairer policy and law. Educate myself.
O Organization —Make those follow-up calls to the veterinarian, to the paterfamilias, to my sister the psychoanalyst. Protest in support of Black Lives Matter.
D Discipline — Chose, again and again, to approach life with positive intent. And of course, vote.
H Honesty — Bear witness. Face racism. It’s a choice, bearing witness. The other option is to distract myself or turn away. That is dishonest.
we always pray for your success. Thank you!
If you have any question regarding this article can ask in the comment box or follow to our Facebook page click on the link https://www.facebook.com/SocialSkill-105589461119803/?modal=admin_todo_tour where we give a daily update regarding personality development. For joining us you must follow our blog https://socialskill.in/. Because we provide all the articles after so much research and give you only important and informative information.

How to train your mind to stay positive?
No Comments

Some Effective Tips to Detect Lies
No Comments

How to Think Faster and Smarter?
No Comments

How to Reply Any Question Effectively?
No Comments